Outside of aviation, technology, and logistics, one of the most significant and essential industries in southern California is biomedical research and pharmaceutical production. Orange County, San Diego, and L.A. are all major hubs for the pharmaceutical industry, with L.A. alone being home to over 100 biomedical companies within the county lines.

With a well-established presence and a deep pool of talent available in the area, it’s no wonder that medical and nutritional companies like NatureMedic have decided to set up shop here. NatureMedic manufactures and distributes a compound based around Fucoidan, a naturally occurring substance derived from the cell walls of seaweed. After fucoidan was discovered to have a number of positive effects on metabolic health and showed promise as a therapeutic for cancer, the medical community began integrating the substance into an increasing number of therapeutic trials. The possible applications for the substance range from cancer treatments to renal disease and digestive health, making it a high-value medicinal compound that hadn’t gained much traction in the United States. 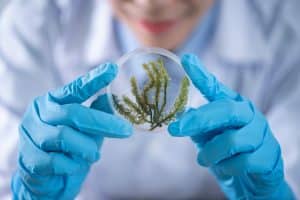 That’s where NatureMedic saw its opportunity. Using L.A.’s natural advantages as a pharmaceutical hub, the company developed a number of consumer-grade products utilizing fucoidan extracts combined with AHCC®, a compound derived from a fungus native to Japan. The product line boasts immunity-boosting properties and has seen quite a bit of success in a more health-conscious post-COVID American population.

The company found so much success, in fact, that it quickly outgrew the office space it had initially rented out during its initial years as a startup. With sales riding high and more help needed to accommodate the increasing demand, the company decided to take the plunge and purchase an office building in Torrance, one of many cities contained within the L.A. metropolitan area and a part of the South Bay region.

With the move came the need to furnish the office and ensure employees new and old had everything they needed to get things up and running as quickly as possible. To help speed this process along, NatureMedic decided to keep the office equipment they had been using at its old location and enlist the help of Creative Office Design to help design their new space and add in new desking space to house the additional employees.

NatureMedic and Creative had worked together to furnish the original office space, and neither company found any reason to shift away from the Friant Novo system that had been so successful in their previous office. The modular system was flexible enough to be easily incorporated into the new space’s design, and the furniture provided employees with the electrical and data connections they needed to get set up within minutes of arriving at their new workspace.

After surveying the available space, Creative’s interior design team drew up an office plan that utilized the existing desking equipment and added new desking as needed. Once the design had been settled, the team helped move the Novo systems from their old office to their spots in the new location and installed the newly ordered materials.

With the office now equipped and wide open to new hires, NatureMedic could continue dipping into L.A.’s well of talent and keep the company’s rapid growth going pace. If your company is going through a period of rapid transformation and needs new or used office furniture to house your new employees, give Creative Office Design a call. With Creative, you don’t just get access to some of the biggest brands on the market; you also get a highly professional team that can provide you with the interior design services you need to get the most out of your space.

It’s 2021 and, like a hibernating bear taking its first few tentative steps outside the den after a long winter, companies are beginning to reintroduce their workforce back to the office. With...

END_OF_DOCUMENT_TOKEN_TO_BE_REPLACED

Creative Office Design teams with a vast network of dealers to help you fulfill your project needs. Please contact us to schedule an appointment for a showroom or site visit.