As we have discussed before in a previous blog post, the roots of the American aerospace industry run deep here in Southern California. In the years directly proceeding the second world war, 60 to 70 percent of the entirety of the industry was located here in the south bay.

This trend continued throughout the Cold War years as the space race spurred massive government investment into the field. More and more weapons manufacturers made their own foray into aerospace, with major aviation companies including Lockheed, Northrop, Douglas, and Rockwell opening their own SoCal branches to take advantage of local talent.

As the Cold War wore on, 15 of the largest aerospace companies were headquartered in the south bay, and one out of every ten jobs in the industry was located here in Los Angeles. With the collapse of the Soviet Union, so came a collapse of the industry’s presence in the area.

Over the next two decades, employment in the industry here in southern California would drop to a mere third of the highs reached in the late 1980’s. Repeated attempts to close down some of the larger military airbases and manufacturing facilities around the Los Angeles metro made some despair for the industry’s future in the area.

Over the last decade, however, a renewed interest in private space travel and exploration has fueled a revitalization of the field. Fresh-faced startups including SpaceX, Varda Space Industries, and Mynaric have set up shop next to veteran companies including Northrop Grumman and Boeing here in the south bay and injected a frenetic energy into the region.

This frantic rush of new blood into an area rich in history has created a unique mix of sensibilities for both aesthetics and functionality. The combination of the tech industry’s preference for collaborative ergonomic workspaces with the aerospace industry’s unique space-age aesthetic has driven up demand for office equipment that is flexible enough to satisfy both needs. 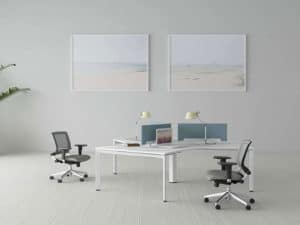 For example, Varda Space Industries was looking to outfit their office with equipment that would conjure up images of a sci-fi future circa 1960 to provide workers with the mindset and energy they needed to bring out their passion for their work. To this end, they worked with Creative Office Design to outfit each workstation with the ODS X-Bench system, which allowed engineers and designers to quickly and quietly shift from sitting to standing positions as they worked.

Similarly, Mynaric needed to quickly outfit their new office to provide a modern tech-oriented open concept workspace for the flood of new talent coming through their doors. Creative set them up with the Elements series of collaborative benches that would allow easy cross-departmental and team communications and encourage an atmosphere of high-efficiency teamwork.

Unfortunately, the newly revitalized aerospace industry faces a number of challenges looming on the horizon. Despite a yearlong reprieve, supply chain issues are likely to come roaring back as already clogged ports face a shortage of logistics workers and a strike organized by the longshoreman’s union.

Companies need to start preparing now for an uncertain future, and that means working to get their offices set up for the next year. To that end, Creative Office Design has quick ship lines from the industry’s most well-known brands that are flexible enough to satisfy the dual demands of aesthetics and functionality for south bay’s modern aerospace companies.

Creative Office Design teams with a vast network of dealers to help you fulfill your project needs. Please contact us to schedule an appointment for a showroom or site visit.